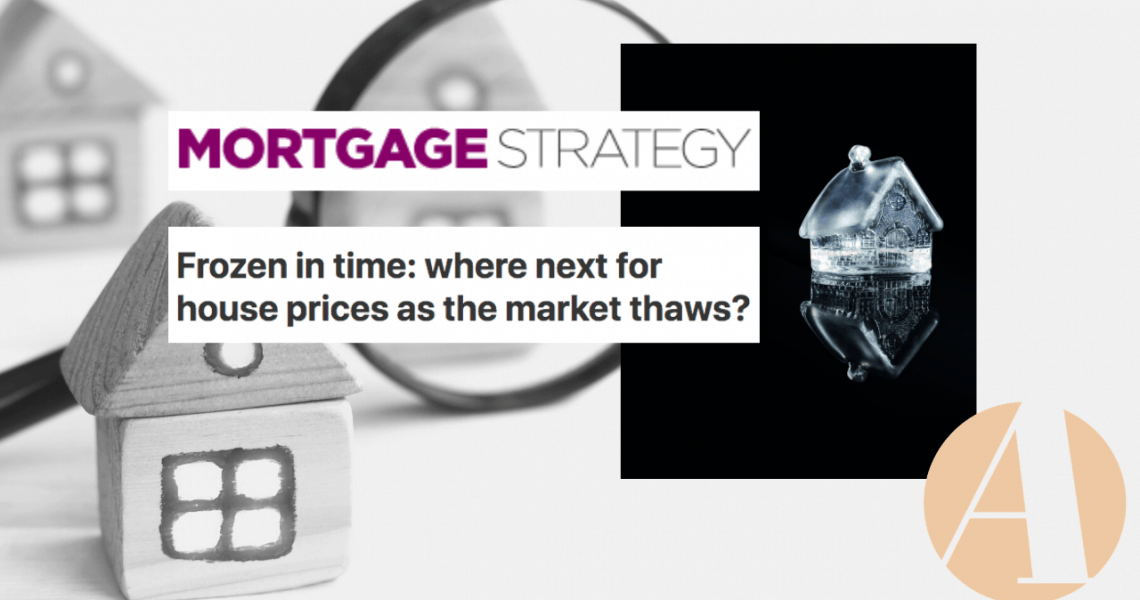 Published on MortgageStrategy.co.uk: Frozen in time: where next for house prices as the market thaws?

With Covid-19 putting the property market on ice, Anna and other industry experts join Leah Milner to gauge the potential impact on house prices.

Before the coronavirus pandemic hit the UK in March, the housing market had begun the year with a flying start. The decisive general election result in December had brought an apparent end to Brexit uncertainty and spurred many buyers into action after years of indecision. Pundits hailed the ‘Boris Bounce’ as indices recorded the strongest start to a year since 2016.

But almost overnight the property market was practically frozen in time. The lockdown took surveyors off the road, making physical inspections impossible. Wary of relying on desktop valuations for higher-risk cases, lenders slashed loan-to-values and pulled hundreds of products from sale. Then the government told buyers and sellers to delay home moves wherever possible, which put an estimated 373,000 transactions worth £82bn on ice, according to Zoopla’s calculations.

History is no guide

Until the thaw arrives in the form of an easing of lockdown restrictions, allowing sales to proceed once again, it will be difficult to gauge the impact on house prices. Looking back at previous crises offers only a limited guide to what may happen next, because the scale of the current shutdown is unprecedented.

During the last credit crunch, there was a considerable delay before the run on Northern Rock in September 2007 and the collapse of Lehman Brothers a year later fully fed through to UK house prices. Over the 16 months to February 2009, prices fell by nearly 20 per cent to an average of below £150,000, according to Nationwide Building Society data.

Among the most pessimistic predictions for the impact of Covid-19 is the Centre for Economic and Business Research’s forecast that house prices will fall by 13 per cent across the UK this year, with some regions faring better than others.

The thinktank’s analysis of regional job markets suggests that Yorkshire & Humber and Northern Ireland could be worst hit, followed by Wales and the East of England, because they have a higher proportion of people working in sectors such as manufacturing, construction, retail accommodation, food and other service sectors where social distancing is difficult.

It says the housing markets in these regions could face the greatest potential disruption due to income and job losses in the months ahead.

Savills, meanwhile, is predicting a drop of between 5 and 10 per cent this year, but is sticking with its forecast that prices will increase by 15 per cent over the next five years. It believes property sales will be down by 20 to 40 per cent compared with the five-year average.

Rival upmarket estate agent Knight Frank expects a 3 per cent reduction in prices this year and a 38 per cent fall in trans-actions, costing HM Revenue and Customs £4.4bn in lost
stamp duty.

The health of the wider economy and consumer finances are key determinants of house-price trends, and there are already signs of mounting pressures. Research by the Standard Life Foundation revealed that half of UK households believed they would struggle to meet their financial commitments over the next three months, and a quarter had already lost a significant part of their income as a consequence of the crisis.

Meanwhile, UK Finance data shows that one in seven borrowers has had to ask their lender for a payment holiday. The figures come after the Office for Budget Responsibility warned that UK GDP could shrink by 35 per cent in the second quarter and unemployment could reach 10 per cent.

Despite the many unknowns, Mortgage Strategy asked a host of industry commentators to share their thoughts on the future path of house prices once lockdown ends.

Impact Specialist Finance managing director Dale Jannels thinks prices could fall by as much as 20 per cent across the UK.

“We have seen a number of specialist lenders cut LTVs to 60 per cent, which suggests they and their market funders are worrying about a significant drop in house prices,” he says.

“Whether this materialises will depend on the longevity of the virus and the continued impact on jobs and the economy. If we hit recession, that could lead to greater reductions.”

But there will also be winners, he believes.

“I expect to see portfolio landlords buying more properties in the North due to better rental yields.”

For Strategic Property Investing author Anna Clare Harper, the CEBR’s forecast of a 13 per cent fall seems the most likely scenario as borrowers face liquidity constraints. Harper, an investor herself, says: “In many parts of the country, this may reflect a convergence from over-inflated prices to true market value, so it will not be entirely bad news. A fall in price for one seller is an improvement in affordability for a potential buyer.”

Chapelgate Private Finance associate director Georgina Morley foresees prices falling by slightly less than the CEBR’s prediction but within the range of Savills’ forecast. She expects a drop of at least 10 per cent by the end of the year, but is optimistic that a slow and steady recovery will follow that.

“Increases in unemployment, death rates, debt and divorce as a direct result of Covid-19 will all have an impact on the price of property as they will result in some forced sales,” she says.
A return to more restrictive lending conditions could also weigh on the market, but this will be partially offset by the continuation of low mortgage rates, with plenty of options to fix for below 1.5 per cent, she believes.

“Lenders like Nationwide and HSBC are no longer taking variable income into account, so accessing mortgages over the next 12 months may become more difficult for some applicants.”

He says: “In order for values to return to a stable and sustainable level, interest rates need to remain low, and we may need to see government incentives such as the temporary removal of stamp duty to help bolster much needed consumer confidence.”

Chisnall agrees with recent comments from Brightstar chief executive Rob Jupp, who has called for house-price indices to be suspended until there is a meaningful number of transactions. Like Jannels, Chisnall says there will be plenty of buyers poised to take advantage of any weakness in prices.

“We have a number of investor clients who are gearing up on their existing portfolios so they are ready and prepared to go on a discount shopping spree when the market re-opens,” he says. “If that becomes a trend throughout the market, we could see a relatively quick bounce-back as demand starts to outstrip supply.”

However, unless investors have strong cash reserves, they will be reliant on favourable credit conditions to fund their ambitions.

“Lenders will need to play their part too, by being flexible with their underwriting and not punishing borrowers who have had reduced income via lower commissions or bonuses, or via furloughing, through no fault of their own,” says Chisnall.

“The sooner borrowing becomes fluid, the sooner we can put all of this behind us. I expect a very turbulent rest of 2020, but one of great opportunity.”

Sitting somewhere in the middle of the forecast range with a wider margin of error, Mortgages for Business sales director Jeni Browne believes prices are likely to drop between 5 and 15 per cent, with significant regional variation. However, she feels the downturn will be short-lived.

“Due to the physical restrictions put in place by the government and the financial impact on people’s lives, I am expecting a temporary drop in house prices for a period of up to six months, with a recovery by the end of the year,” she says.

“There is a significant amount of pent-up demand in the housing market because potential buyers and sellers held off last year due to the uncertainty that Brexit and the general election created. We experienced the start of the Boris Bounce in early 2020, where the market picked up significantly only to be restrained again by Covid-19.

“As such, I would expect this demand to return as soon as it is safe for people to start moving. Any reduction in rent during this period will be minor.”

From the perspective of Altura Mortgage Finance managing director Rob Gill, the more optimistic end of Savills’ forecast is the most probable outcome.

He says: “With the housing market effectively frozen and little prospect of forced sellers due to government action, our prediction for house prices in 2020 is a relatively modest decline of 5 per cent.

“This may simply be a case, however, of kicking the can into 2021, when the authorities will run out of firepower and the true extent of damage to the economy will be revealed.”

OpenMoney head of mortgages James Brocklebank shares a similar outlook to Gill’s. He says: “While housing transactions have dramatically deteriorated as the market ground to a virtual standstill, I do not believe the overall house-price decrease will be anything near the 13 per cent predicted by the CEBR.

“It is more likely to be in the region of 5 per cent. This is for one primary reason: despite the pandemic causing a seemingly catastrophic stagnation in the short term, the fundamentals of the housing market remain the same. There is not enough property being built for the people who want a home and, if anything, the current situation will exacerbate the problem.

“Before the pandemic, employment was at its highest for many years and interest rates were incredibly low; so, as you would expect, the market was in a very good place.”

Brocklebank predicts the market will bounce back in 2021 and is hopeful the government will extend Help to Buy. He is also optimistic that ministers will bring forward their proposed First Homes scheme, offering discounts to people buying in their local area, which would be another boost for the industry.

Property Investor Today - Revealed: how can you be a strategic investor? 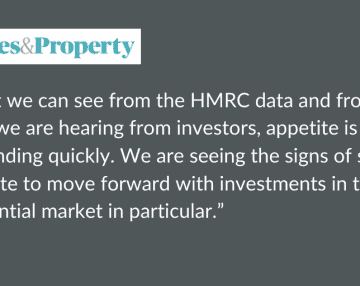 Is investor appetite here to stay? 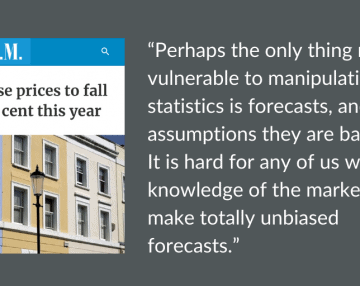